Abraham Accord Coin - Historic Peace treaty between Israel and UAE

“And He shall judge among the nations…and they shall beat their swords into ploughs, and their spears into pruning hooks: nation shall not lift up sword against nation, neither shall they learn war any more." - (Isaiah 2:4)

On September 15th 2020, President Donald J. Trump will host the signing of the “Abraham Accord,” a groundbreaking Middle East peace treaty effectively normalizing relations between Israel and the United Arab Emirates.   In signing the accord, the United Arab Emirates (UAE) joined Egypt and Jordan as the only Arab nations to make peace with Israel.  It may open a new era. Fellow Gulf nations Bahrain and Oman signalled their support, while Saudi Arabia did not oppose it.

“The Abraham Accord will prove to be the moment when the grievances of the past no longer overpowered the promises of the future in the Middle East.”  -Pastor Johnnie Moore

You can be part of these exciting times and the fulfilment of the biblical prophesy by acquiring your very own limited edition Abraham Accord commemorative medal. One third of each commemorative medal sale will go directly to a fund that will help foster stronger economic ties and partnership between the United Arab Emirates and the State of Israel.  Not only will you be acquiring a highly collectable memento of this historic occasion, but also your purchase will allow you to directly partner with the peace process itself.  “Those who bless Israel will be blessed.” (Genesis 12:13)

The Free Oak Wood Case  will be added to each purchase of the coin automatically.

Details of the Coin :

Read More about each element of the Coin 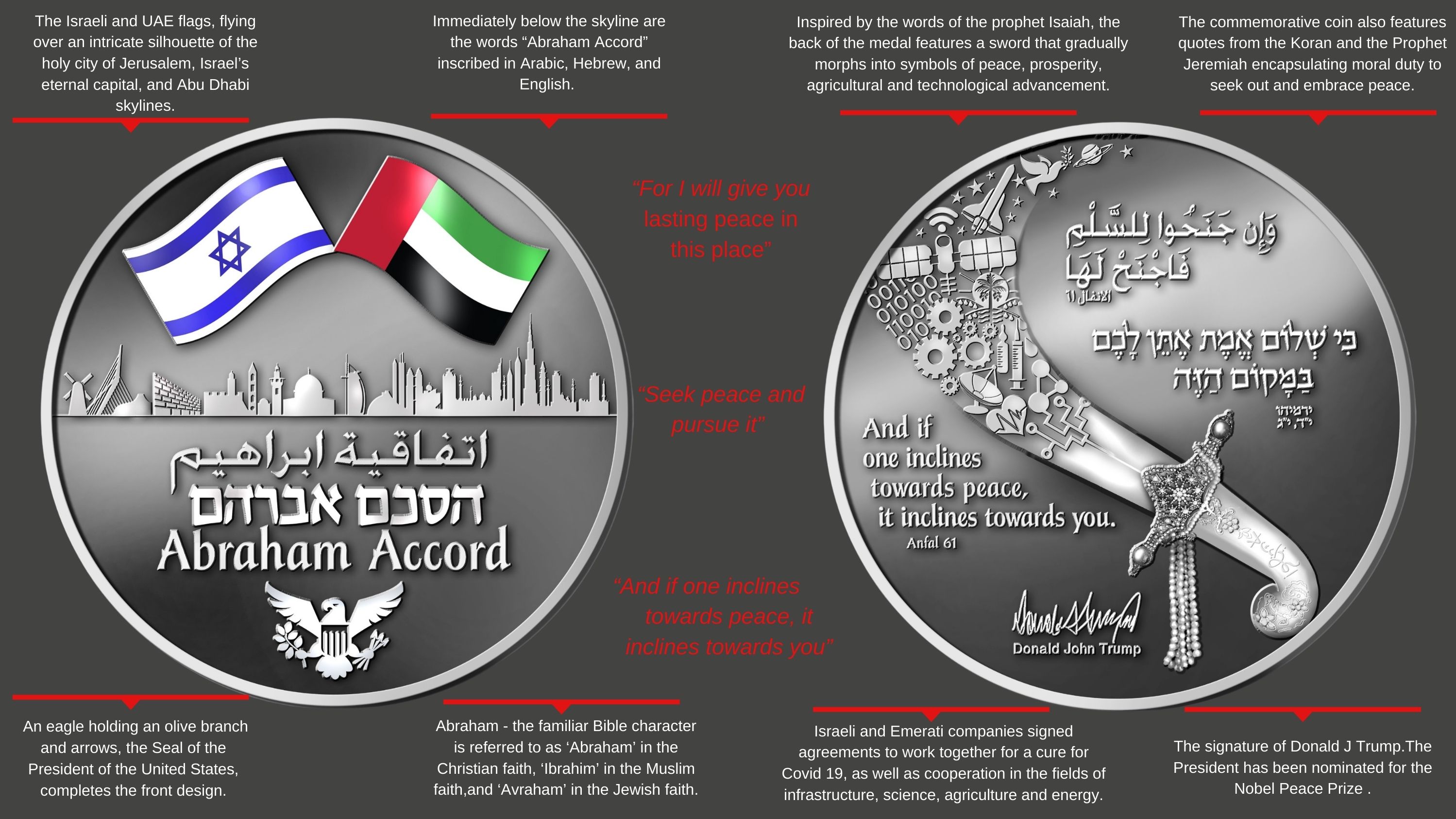 Immediately below the skyline are the words “Abraham Accord” inscribed in Arabic, Hebrew, and English. Abraham was the father of monotheism. The familiar Bible character is referred to as ‘Abraham’ in the Christian faith, ‘Ibrahim’ in the Muslim faith, and ‘Avraham’ in the Jewish faith, and no person better symbolizes the potential for unity among all these three great faiths. An eagle holding an olive branch and arrows, the Seal of the President of the United States, completes the front design.

Inspired by the words of the prophet Isaiah, “And they shall beat their swords into ploughshares” (Isaiah 2:4), the back of the medal features a sword that gradually morphs into symbols of peace, prosperity, agricultural and technological advancement.

The commemorative coin also features quotes from the Koran - “And if one inclines towards peace, it inclines towards you” - and the Prophet Jeremiah – “For I will give you lasting peace in this place” - encapsulate the central teachings of the faiths of Abraham; Judaism, Christianity and Islam, that one has a moral duty to seek out and embrace peace.

In addition to peace between former enemies, the region and indeed the world will benefit from economic prosperity.  There is a younger generation in the region that deserves better, safer and more prosperous lives.  Immediately following the normalization Israeli and Emerati companies signed agreements to work together for a cure for Covid 19, as well as cooperation in the fields of health, infrastructure, science, agriculture and energy.